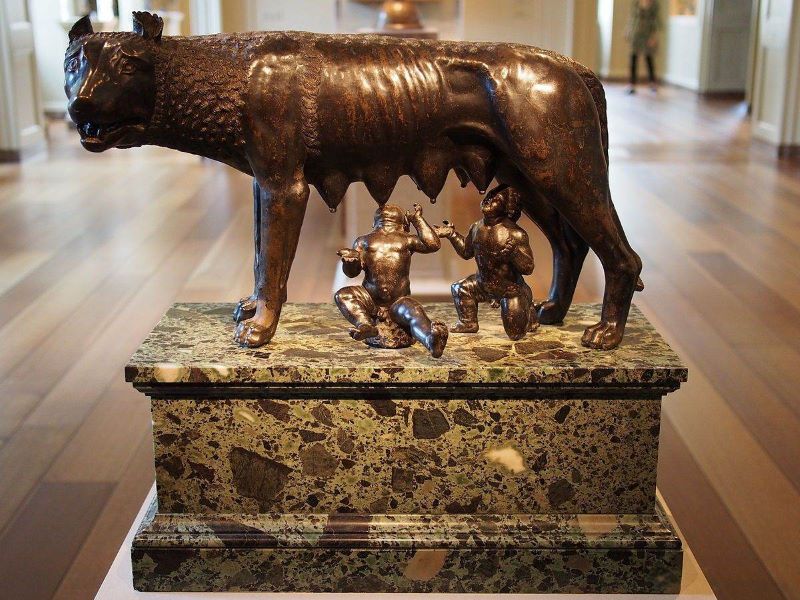 Perhaps only a few if no other ancient mythological icon is more recognizable than the image of the she-wolf suckling a set of twins. This symbol has represented Rome, Italy, since ancient times. The myth associated with it is the most famous one in the tale of the founding of the mighty city.

According to legend, this she-wolf nursed and sheltered the twins Remus and Romulus after they were left on the River Tiber as per the King of Alba Longa’s order. The she-wolf, having just lost her own pups, took the human babies to her den in a cave, caring for them as her own before they were discovered by a shepherd.

Romulus would later come to found Rome and become its first king.

If you want to learn more about the She-wolf symbol, read on to find out the meaning, history, and significance of this Roman symbol.

The wolf held a special spot among the ancient inhabitants of Italy. One myth states that the Hirpini people of Southern Italy were named after hirpus, the Osco-Umbrian word for “wolf.” This came to be so because the Hirpini people were said to have been led by a wolf to the location of their first colony.

The wolf is also a sacred animal to the Roman god Mars, who, according to myth, was the father of the twins Remus and Romulus.

The she-wolf became such a significant Roman symbol, thanks to the legend that says the founder of Rome, Romulus, and his twin brother Remus were suckled and sheltered by a she-wolf that had rescued them on the River Tiber (or in the wild, according to other accounts).

The twins were later found in the wolf’s den by a shephered named Faustulus. Together with his wife, Faustulus reared the twins, who grew up to be mighty men that they were and established their own cities.

Romulus founded Rome in 753 BC upon the Palatine Hill in 753 BC and became its first king.

This legend of the founding of Rome is said to have probably originated in the 4th century BCE. In the early 2000s, archaeologists unearthed remains of a cave and a palace from the 8th century BCE. These discoveries demonstrate parallels between history and legend.

If you happen to find yourself in the Capitoline Museums in Rome, you will find the famous bronze statue of this legendary she-wolf. This statue is believed to date to the late 6th to early 5th century BCE – the early years of the Roman Republic. The suckling twins were attached to the statue only in the 16th century CE.

An iconic representation of Rome, the she-wolf is frequently depicted as a female gray wolf suckling the human twins, said to be Remus and Romulus, the latter being the founder and first king of this mighty city.

The Roman she-wolf is symbolic of a lot of things. For one, it signifies the Roman power. And as wolves are a sacred animal to the Roman god Mars, they are said to have acted as divine heralds, so an encounter with one was deemed to be propitious.

The she-wolf is also symbolic of nourishment as it is seen as a mother-figure. It also represents fertility and protection. The Roman she-wolf is in the center of the foundation of Rome, thus becoming a mother-figure to the city.

The Roman she-wolf is a female gray wolf that is mostly associated with the city of Rome, Italy, and its establishment.

The she-wolf comes from the legend of the founding of Rome as the mother-figure that rescued, sheltered, and nursed the twins Remus and Romulus as infants.

The city of Rome, named after its founder Romulus, is famously represented by the she-wolf.

The Romans had a talisman worn as a necklace or hung above a baby’s crib or bed to ward off malevolent magic and the evil eye. It was called the cimaruta, also known as “sprig of rue” and “witch’s charm.” Some of today’s versions of this Roman symbol are cast in silver, pewter or bronze….

A draco – dragon head – was a Roman symbol of honor and a way to distinguish different cavalry units. Horsemen in the Roman cavalry carried this military standard. Such horsemen were called the draconarii (singular: draconarius). While the aquila or eagle was the standard of the legion, the Roman draco was that of the…

One of the most recognizable Roman symbols, the aquila is the symbol of ancient Rome where it was prominently used as a military standard. Its presence was believed by the ancient Romans to be auspicious. Having outlived the Roman empire, the aquila remains a powerful symbol and is still employed by various countries and cultures…